I had so much fun with the last contest, I decided to offer another one! Enter to win a signed paperback copy of Call of Kythshire (or another book in the Keepers of the Wellsprings series, if you already have that one), AND a print of your choice. I have 8.5″ x 12″ prints of either Flitt, or Tib’s ship up for grabs. These are matted in a 12″ x 16″ white mat.

***Continental US only, no purchase necessary. 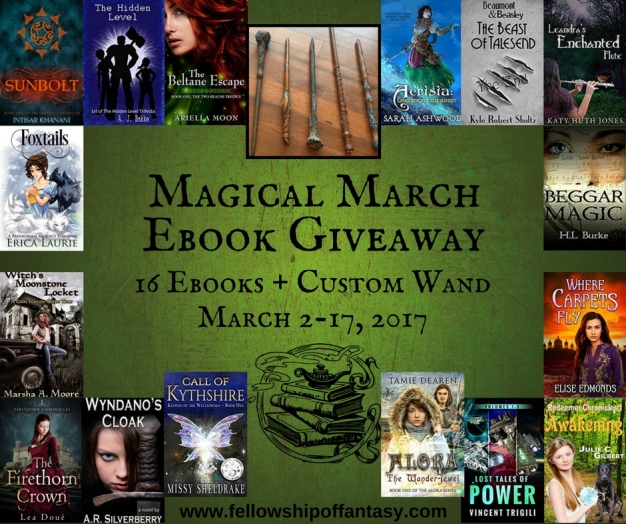 Enchanted lands, magical creatures, fairies and witches and … space wizards? You bet! We’ve got all that and more for our Fellowship of Fantasy March ebook giveaway. Sixteen authors are offering sixteen adventures, along with a little something extra to make your month magical. Keep reading to learn more and get a closer look at a few books in the bundle. 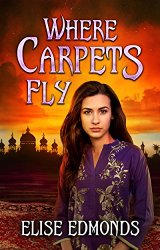 Where Carpets Fly
by Elise Edmonds

However, Elina soon sees a darker side of life: a foreigner arrested at the circus, forbidden schoolhouse rooms with odd comings and goings, and unsociable pupil Simeon’s shady deals at the docks. Everything seems connected to the volatile neighbouring country of Pallexon, but no one will tell her why.

When Elina and Simeon develop a magical mind link, he seems close to confiding in her. But an unexpected voyage takes Elina and Kara away from answers and towards unknown danger in Pallexon.

Alone in a strange country, with no identity papers, the situation rapidly turns into a nightmare when Kara is mistaken for a spy. With her own freedom at stake, Elina must rely on her wits and magic to save her friend and unravel the secrets of Pallexon.

The winding streets and narrow alleys of Karolene hide many secrets, and Hitomi is one of them. Orphaned at a young age, Hitomi has learned to hide her magical aptitude and who her parents really were. Most of all, she must conceal her role in the Shadow League, an underground movement working to undermine the powerful and corrupt Arch Mage Wilhelm Blackflame.

When the League gets word that Blackflame intends to detain—and execute—a leading political family, Hitomi volunteers to help the family escape. But there are more secrets at play than Hitomi’s, and much worse fates than execution. When Hitomi finds herself captured along with her charges, it will take everything she can summon to escape with her life.

Have a look at the entire collection of ebooks, and enter below to win them all–as well as a custom wand similar to the ones pictured here–for your very own.

Giveaway runs from March 2-17. The winner will be notified by email on March 18. [FoF reserves the right to substitute the custom wand with something of equal value for anyone outside the US or Canada.]

It’s time to spice things up a little with an Amazon giveaway for the first book in the Keepers of the Wellsprings series: Call of Kythshire! Here’s the link to enter to win your illustrated Kindle ebook copy:

Fellow authors, do you have a giveaway or promo going on? If so, feel free to post the details in the comments. Good luck!